A Quick Guide to Alcohol and Marijuana in City Parks 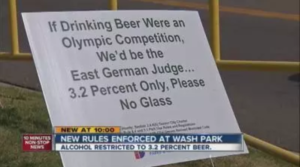 We haven’t seen much of that famous Colorado sunshine lately, but the invitations for volleyball
games in Washington Park and summertime barbecues in Cherry Creek Reservoir are beginning to trickle in regardless. As you pick up the beers and brats for your al fresco gathering, here are a few things to keep in mind about drinking in the great outdoors:

1. Alcohol is allowed in state and city parks—to an extent. The rules allow for 3.2 percent alcohol or less, which is essentially light beer; our state’s celebrated craft beers, a glass of Chardonnay, whiskey or other hard liquors, and any concocted cocktails simply won’t make the cut. Incidentally, Colorado, Kansas, Minnesota, and Oklahoma are the only states to still enforce this 3.2 percent, Prohibition-era law.

2. Glass bottles are forbidden. Cans and kegs are okay, but glass is a safety issue. Your local pool probably has the same rule as well.

3. Marijuana—in any form—is also verboten. Recreational marijuana might be legal now, but only in the privacy of your own home (and backyard). Public consumption of the drug, whether through a vape pen or a brownie, continues to be banned absolutely everywhere in the state.

4. The Parks Department has vowed to issue more tickets for infractions this year. Wash Park residents proposed a complete ban on alcohol in the park earlier this spring, but were appeased with the promise of a stricter crackdown on alcohol consumption instead—something a few of our friends unfortunately experienced first-hand this past Memorial Day weekend. In addition to mounted police on heavy-use days, “Parks and Recreation will devote at least two rangers and as many as four each weekend and holiday to patrol the park, issuing citations (starting at $100) more often than warnings,” The Denver Post reported.

There are plenty of age-old rumors about cops turning a blind eye to those drinking out of paper bags or water bottles, and even some piss-poor advice suggesting one merely disguise the brand name of the alcohol in question, but c’mon, an outing to the park is pretty much free. Don’t let it cost a couple of Benjamins just because you couldn’t adhere to the rules for one afternoon. After all, there’s no law against beer-battered wings, now is there?