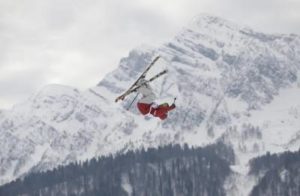 If you’ve been inspired by the Olympians currently dominating our television screens and are heading up to the mountains to try your own hand at some gold-medal stunts this weekend, here’s a useful tip: Leave the weed at home.

We know. Everyone on the chairlift is doing it, and resort officials—though irritated—haven’t been very successful at curbing cannabis consumption on the slopes. Still, smoking pot beyond the base area is a huge risk for one crucial reason: Colorado’s mountains belong to the U.S. Forest Service and are thus federal land, meaning Colorado laws do not apply up there.

Arapahoe Basin, Breckenridge, Steamboat Springs, Vail, and our other famed ski havens rent their land through seasonal contracts with the U.S. government, which continues to ban all marijuana consumption and possession. If you’re caught while on the slopes, you won’t be able to protect yourself under Colorado’s legal recreational marijuana laws and you’ll be subject to the usual drug charges of fines up to $5,000 and/or a prison term of up to three years. Those misdemeanor offenses, in turn, will affect your federal student loans, social benefits, and several employment prospects.

There is some uncertainty about whether the parking lots of these resorts are part of the federal forests, but Colorado bans marijuana use in public places—which parking lots definitely are—anyway. Furthermore, there is an open container law in effect, which prevents skiers from getting stoned in their cars in-between runs.

As if all that isn’t enough to deter you, just getting on a chairlift under the influence of marijuana is a violation of the Colorado Ski Safety Act; the penalties for which include losing your seasonal ski pass, fines, or a combination of the two. The same rule applies for hitting the trails drunk by the way, regardless of how much beer they sell at the snack bar.

In 2012, the U.S. Forest Service issued 112 citations for marijuana possession across their Colorado jurisdiction (including ski and camping areas), while 93 were ticketed as of September 2013. Those numbers might seem insignificant, but certainly expect to see the resorts themselves cracking down on cannabis usage as more and more out-of-state tourists complain about the pervasive smell of pot invading their weekend getaways and threaten to take their business elsewhere.

Recreational marijuana sales are illegal in the town of Vail and in downtown Breckenridge and Steamboat Springs, but individuals over the age of 21 are certainly allowed to use marijuana in private spaces throughout Colorado, so save it for the après-ski hot tub instead.