Skiing (and Boarding) While Intoxicated 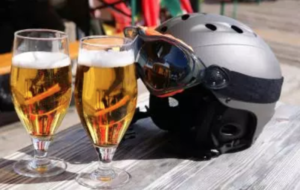 It’s time for ski season in Colorado and the resorts are starting to open. This is an especially fun time of year for winter sports fanatics. Most of the opening day celebrations are filled with costumes, music, alcohol, and more and more frequently, marijuana. As you start to celebrate ski season keep in mind that skiing under the influence is against the law and can cost you more than a round of Fireball.  The Colorado Ski Safety Act (CSSA) is the law that governs skiers and boarders while on the hill; it sets standards for what risks skiers assume as “inherent dangers” of the sport.

Skiing Under the Influence

The CSSA helps keep everyone be safer while riding. Part of increasing safety means limiting impairment on the slopes; although on-mountain bars might make you think otherwise. This act makes it illegal to use ski lifts, ski slopes, and trails while you’re under the influence of alcohol or drugs.

What this realistically means is that you can get a ticket for riding under the influence. It doesn’t happen often, but it does happen. If you are unlucky enough to receive one of these tickets, it won’t affect your driving record, but explaining it at your next job interview might be challenging.

Marijuana will also get you in trouble on the slopes, lifts and gondolas. We’ve already discussed ski resorts in places you can’t smoke. The main point; if you are caught smoking at a resort you can get a ticket and have your lift pass suspended, and let’s be honest, hiking up a mountain to ski is not high on my fun list.

As far as legal trouble goes, getting a ticket isn’t the only repercussion that you’ll have to worry about; if you are found to be at fault for an accident and you were negligent, you can be sued be the effected party, as well as, face criminal penalties.  It isn’t uncommon to see a Sheriff’s Deputy on patrol while you’re carving down the hill, and they aren’t there to enjoy the fresh powder.

The CSSA does allow you to sue a ski area operator if negligence played a role in an injury. The circumstances are unique to each case but an experienced attorney will be able to help sort out details. If you were in a skiing accident and have questions, we’re here to help.

The CSSA notes that the risk of a skier/skier collision is not an inherent risk or a risk assumed by a skier. This means if you decide to straight line your favorite run and mow someone down when you can’t stop, you might find yourself in a world of trouble.