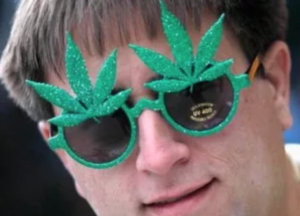 In Part 1 of our marijuana prohibition series, we discussed Harry Anslinger and William Randolph Hearst, two men who played a big part in the demonization of marijuana and its eventual prohibition. This week, we’re continuing the series with a look at the Marihuana Tax Act of 1937.

Throughout the 1930s, the unemployment resulting from the Great Depression fostered an anti-immigrant sentiment throughout the United States. This anti-immigration stance was directed mostly toward Mexican immigrants, who brought recreational marijuana to the U.S. after the 1910 Mexican Revolution. Altogether, this increasing prejudice and a flurry of anti-marijuana research linking the drug to violence, crime and social deviance instigated a massive propaganda campaign against marijuana, perhaps most famously reflected in the film Reefer Madness by French director Louis Gasnier.

Harry Anslinger, who by this point had become director of the Federal Bureau of Narcotics, spent years gathering “evidence” of marijuana’s dangers, including a bunch of articles published by his buddy William Randolph Hearst describing ax murderers and their propensity for marijuana use, among other lurid tales.

In 1937, Anslinger presented his findings to Congress, where he found a foe in Dr. William C. Woodward of the American Medical Association (AMA). Woodward took issue with Anslinger’s doctoring of previous AMA statements to make it seem like the AMA supported Anslinger’s views (the AMA did not). Woodward also chastised Anslinger for using the word marijuana in the name of the bill, a blatant fear-mongering tactic. At the time, many Americans were not even aware that marijuana and cannabis/hemp were the same plant, and cannabis was used for a variety of useful products. Woodward systematically broke down the lack of true evidence from any accredited organization demonstrating any danger from marijuana beyond the potential for addiction. It was all hearsay.

All it took to shut down Woodward’s entire argument was for Congress to point to Hearst’s article. “If it’s in the press, surely it is a big problem. Everything you read in the newspaper has to be true.” That’s not a direct quote, but it gets the point across.

Once the bill passed to the floor of the house, it was signed into law after a committee member told the Speaker of the House that a doctor from the AMA had spoken to them and supported the bill entirely.

Thus, marijuana was banned at the federal level on the back of what amounts to a series of blatant lies.

How Do I Get Weed Out of My System?

How Do I Get Weed Out of My System?