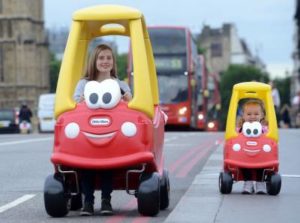 We’ve devoted a fair amount of posts in this series to all the unconventional contraptions you can earn a DUI in, but now it’s time to return to the dear old automobile itself— in a manner of speaking.

Do you remember your very first car? No, not the prized jalopy you drove into your high-school parking lot, but rather, that shiny set of righteous wheels you owned back in the day? That’s right, we’re talking about the precious red plastic convertible you were gifted around age four. Well, some people never quite outgrow their toys.

Paul Hutton, an electrical engineering student in the UK, was enjoying a few pints while he revamped the wheels of an old Barbie toy car with his son. He then “couldn’t resist the temptation to take it out,” and was quickly pulled-over for being twice the drunk-driving limit. Since Hutton had a previous DUI arrest on his record, he was subsequently banned from driving a real car for three years.

Hutton admitted to being a “complete twit,” and also provided this noteworthy detail: “You have to be a contortionist to get in, and then you can’t get out.” Did we mention the pink Barbie car could be outrun by a pedestrian?

Hutton’s not alone in commandeering a toy car though. Last year, a drunk Arkansas woman crashed her Pontiac Grand Am into a mobile home before jumping into a neighboring child’s battery-powered truck and attempting to flee the scene. She was more than three times the legal BAC limit, and wasn’t wearing any pants or shoes at the time of the incident.

On the other hand, you don’t necessarily need to be in the toy car yourself to be arrested for drunk driving. That’s what happened to an intoxicated couple in Florida who tied their granddaughter’s Hot Wheels car to their SUV with two dog leashes and began towing the child along an access road. When police found them, the inebriated grandmother was cheering the girl on from the open rear hatch and the grandfather admitted to having already lost his license for 10 years following a previous DUI arrest.

Whether it’s a classic roadster or just a little toy car, it’s really best to stay away from any and all vehicles if you’ve been drinking.