D’oh! DUI?: The Legend of the Zamboni 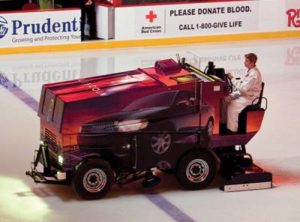 It’s a pretty good time to be a Colorado sports fan right now. Patrick Roy is turning the Avs back into a victorious team, the Nuggets are on a hot winning streak, and the Broncos seem to be Super-Bowl bound (fingers crossed).

We, of course, have a one-track mind, and while some of our beloved sports heroes have racked up DUIs themselves (We’re looking at you, Todd Helton) and hardcore fans have blamed the game for their drunk driving, we’re more interested in whether it’s possible to get a DUI while actually on the field, court, or rink.

So this week, we present to you the legend of the Zamboni DUI.

It was a crisp winter night in Apple Valley, Minnesota. A PeeWee hockey game had just ended and another one was about to begin when Joel K. Bruss, the part-time rink attendant, set about clearing the ice. As the players and their parents looked on, Bruss “weaved across the ice erratically and smacked the machine hard against the boards. About 25 minutes into what should have been a 10-minute job resurfacing the ice, the driver…tried to maneuver the unwieldy machine into the arena garage,” reports the Star Tribune.

The police arrived on the scene to find the Zamboni stuck between the rink and an outer walkway, with Bruss, who already had a few DUI convictions to his name, clutching the machine to keep his balance. A urine test revealed he had a BAC of 0.32 (four times the legal limit), and he plead guilty to the DWI (driving while intoxicated) in May 2012.

A similar incident occurred in 2005, when 64-year-old John Peragallo started speeding around the ice after a breakfast shot of Sambuca and two Valium-pills; a superior court judge eventually ruled that Zambonis are not considered motor vehicles in New Jersey, however, because they can’t carry passengers or be taken on the highway.

A judge in Colorado might not feel the same way though, so don’t get any fancy ideas the next time you’re at the Pepsi Center.